After I blogged yesterday, I finally arranged to meet with Jasper, a friend I met via Club Tortimer! He came to Miagen first to meet my townsfolk and drop off a couple of things (thinking back on it, I sure wasn't very hospitable... what was I doing?) but then we went to his town, Windfall. It's a VERY cool town. 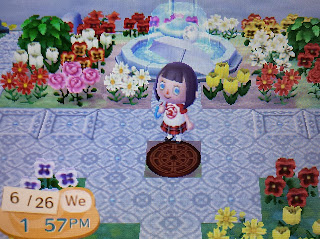 This is a little segment by the fountain that's below his house. How can it be possible that we started our games at about the same time, yet his town is so much more developed? :o Madness!

We went to his house, too, and it was just as incredible! He's got a full set of rooms, so he was able to get the modern home framework for the exterior of his house. I chose to fully expand my upstairs before adding more rooms, so we're at similar stages of the house expansion process, at least. ;) I also felt it necessary to take a picture of his arcade/Nintendo room. I'm surprised at how much STUFF he's managed to accumulate so far -- I mean, no offense to my neighbours, but what they give me is junk compared to this stuff! 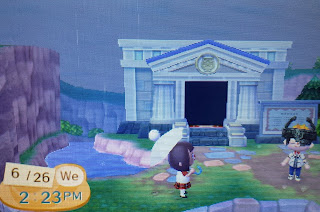 And when we visited his Main Street, I noticed that his museum was on the wrong side! (Well, probably not wrong for him, but since I've only seen museums on the right, it seemed wrong for me!) D'awww, the museum looks cozier on the left, though, since the holding pond is all nestled in between the museum and the wall... :) Then I had to leave for dinner, but thanks Jasper for the awesome WiFi! 'Twas so fun to see your lovely town and house! ^ ^

Now, onto today, during which a certain travelling camel visited my town. :D

She's certainly a funny lady, what with all that deadpan humour of hers. ;)


She does offer quite a deal, too -- for 3 000 Bells per character, she gave their front room a new flooring and wallpaper makeover! Usually, she uses at least one of her own exclusive wares to decorate, as well, however... 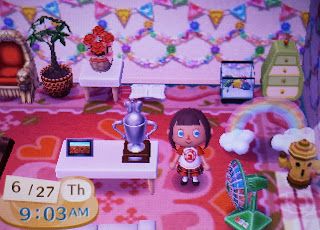 ...This happened. Gee, Saharah, how did you know that I hate pink? >_< But I guess my house kind of deserved that one, 'cause it did sorta look like a party threw up on it. (It also gave me a heads-up that it was time to give my poor house a much-needed clean up of all the mumbo-jumbo I'd thrown in there throughout the course of the game so far...) Needless to say, I still haven't touched the wallpaper and the only things in the room now belong to the throne ensemble.

Hey, speaking of the throne... 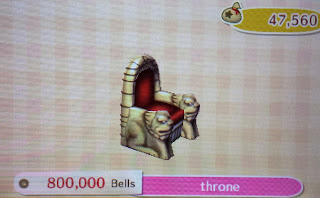 OMG. . _ . 800 000 Bells?! I got mine for FREE from Bluebear... Scratch what I said earlier about my townsfolk only giving me junk. Thanks, Bluebear -- you saved me almost a million Bells! :D 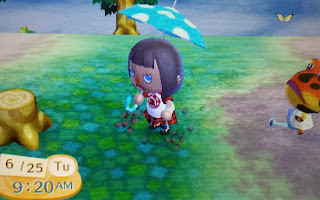 Oh, wait, this is from Tuesday. o.O Another 3DS screenshot that I forgot about. I like this one because, while I originally fell in a pitfall and Drift freaked out, it looks like I'm doing a ground-pound or something here. And Drift's expression. xD

Following the subject of Drift, he suggested we roar together today like Kid Cat did when I went to Shantaki! ...Except his was lame and not funny at all. I expected higher of you, Drift. 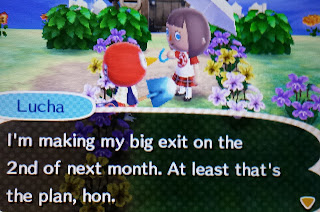 Also, it has been announced that Lucha will be the first villager to move out of Miagen. Truth be told, he'd been getting a little creepy towards my mayor character as of late, so I'm not too sad to see him go. O.o As you can tell by the catchphrase. (By the way, I did NOT tell him to say that; he stole it from Bluebear!)

YES, PLEASE, CALL ME SCAT. This cracked me up. I had completely forgotten about this awful nickname ever since Molly asked Saffron if she could call her S-cat. I only accepted because it was Molly... But you know what? Why not. Heck, the whole village can call her Scat.

Better late than never, as they say. But not when you're a second-rate silver slingshot. Sorry, but you're going to one of my other characters, tool.
~ 7:30 PM