Squeeeee! How exciting! I've been waiting for this! I FREAKED when I saw this notification on the 19th. I was going to do a math exam that day, so nothing seemed optimistic, but then... :) 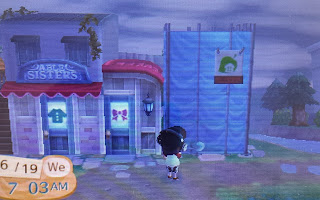 And then, DOUBLE WHAMMY! Kicks is also moving in! OMG! I'm so excited for shoes and socks, it's not even funny! My brown slip-ons (Micah) and pink slip-ons (Cassidy) are getting real old. Even though my mayor character also has Samus boots. xD 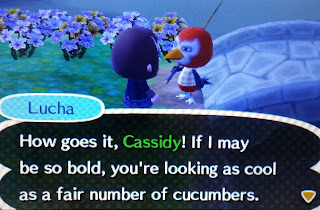 Later on, I was talking to Lucha and he said this. I just think it's kinda funny -- I like taking pics of things that villagers say, because some of it is really well scripted. ;)

So, these pictures just detail some more stuff I've been up to over the past few days -- cheating the balloon system by popping balloons with my net when they dip down over the cliffs, breeding hybrids <3, finding some neighbours' lost items (always in the same place, too... coincidence?) and sitting on the bench watching all the rain I've been getting with my aqua polka umbrella. :) 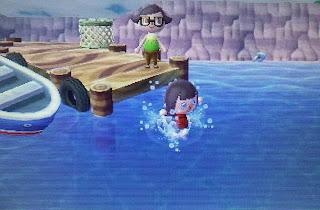 I GOT A WETSUIT. <3 And it's a red one! I'd never seen one like it before! However, I'm giving it to my other player, Micah, who looks better in red than my mayor character. ;) I'm hoping for a blue or white one for Cassidy. (And/or one that looks a little more feminine?) Until then, though, I'm stealing Micah's wetsuit, because she likes to swim, too. >:)

I've also been working a lot with the landscaping around my house. The theme I have in mind for my own house is rustic, almost medieval-ish. It's like the feel of the original town Miagen from Dragon Warrior Monsters 2. I've planted for hibiscus bushes in front of it and an entire garden of violets behind it. Then there's a stump and a fruit orchard in front of it. (There's also a path to the beach just to the left.) I know it's a little difficult to see in the pictures, but hopefully I'll be getting more shots of my house as it progresses. ^ ^ 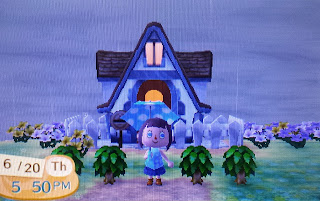 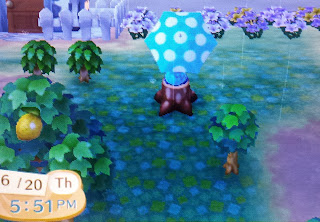 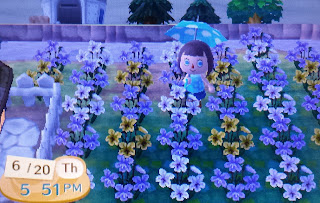 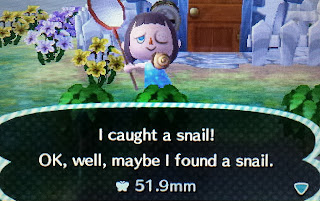 Ugh, and with all the rain there's been, I've had lots of snaily friends visiting my vegetation. x) 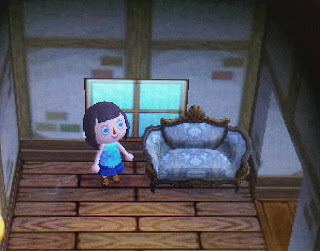 Earlier today, my sister was a dear and gave me a wrapped present. I wondered what it could be because she seemed pretty excited about it. I opened it to find...

See, my sister and I bought the game guide, so I had been looking at this Rococo series for my house for a while. But since apparently they're all spotlight items, I figured it would be a while before I got any items. However, and I don't know where Ryann got it, but now I have officially started collecting my dream series and I can't wait to see the finished collection! <3
~ 7:52 PM