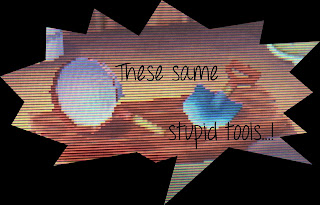 Yup, that's right. For the third day in a row. If I remember correctly, the bug net has always been on the left and the shovel on the right, just to make sure things remain infuriating. This means no fishing rod and no slingshot. Those sharks and balloons are SERIOUSLY trolling me. 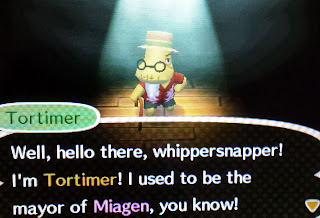 On a happier note, Tortimer paid me a visit on the starting screen today, telling me to meet him at the dock. He then informed me that I can go to the island tomorrow! Squeeee! (At least, I think that's what he meant.) Once I get to the island, I'll be able to buy (or rent) a wet suit so I can SWIM! :D 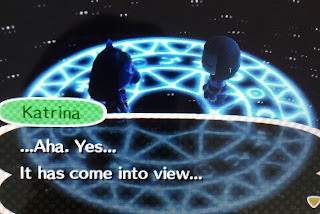 Fortunes in New Leaf are much more epic than fortunes in Wild World, back when Katrina used cards and spouted gibberish. The fortune I received from Katrina really hit home with me, today in particular, and left me thinking for a while afterward. (Of course, it's possible that I read more into it than I should have, but it impacted me strongly all the same.) This was definitely worth my 500 Bells, because Katrina appears to have finally gotten her act together in New Leaf. 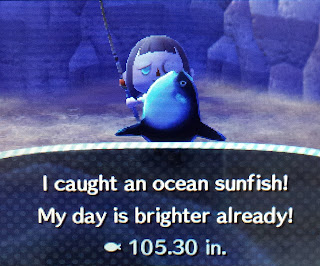 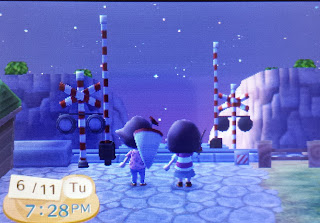 My sister and I did some playing around on wireless connection today -- she lent me her fishing rod. ^ ^ With it, I caught my first shark of the game, an ocean sunfish (which certainly wouldn't have been my first choice of shark, but what're you gonna do?) Oh, and when I went to Ryann's town, Shantaki, I met Kid Cat, who is one funny guy: 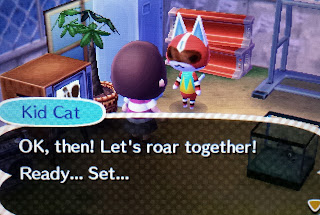 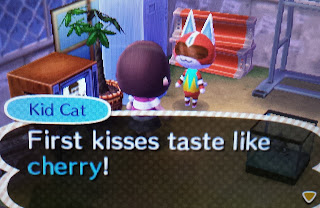 WTH Kid Cat? xD I honestly don't even know what this was supposed to mean. I think it's only made funnier because Kid Cat's just so cute. I have to wonder, though... since "cherry" is highlighted in blue, does that mean he could have said they taste like pear? Or lychee? Or durian??? 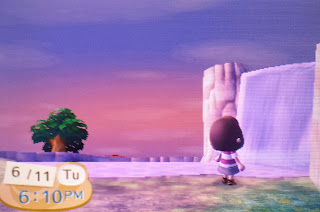 And then I took this somewhere in between when Ryann came to Miagen and I went to Shantaki. It's just a pretty view of the waterfall to the east of Miagen, like the photo I took two days ago on the ledge beside my house overlooking the beach and other waterfall. ^ ^

By the way, Lucha moved in properly, but he's kind of a strange looking red and white bird. I didn't really want to get a picture of him. Maybe later.
~ 10:58 PM