Mostly a lot of landscaping (and the Summer Solstice) 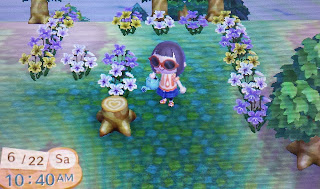 Yes, there certainly was a lot of landscaping. And during some clear-cutting, I found a heart-patterned stump! Of course, I left it there since apparently cool stump designs grow mushrooms around them in the fall. Or so I've heard. But anyway, I'm constructing a flower path around my town to lead to all the major attractions (Re-Tail, Town Hall, Mayor's House, etc.) so I've been taking a LOT of gardening tours for all the violets. ;) 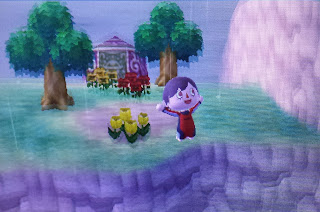 Micah finally got his wetsuit. xD I kind of like that picture, actually -- I used the sports setting on my phone and it blurred the background, but kept the subject stagnant. Which is nice. :3


I also got two more badges with my mayor character. I'm a little surprised my sister got the Village Representative one before me; it seems my light's always red before hers! 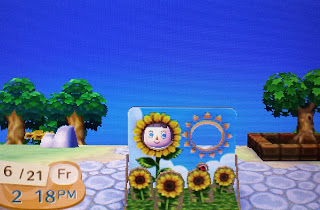 Then, of course, being the Summer Solstice and all, I had to take a picture with my face in the photo board. :) I really should've had Ryann over to fill in the empty sun, because it looks sorta pathetic with just me in there. Bruce was hanging around earlier -- why didn't you take the other spot, Bruce? 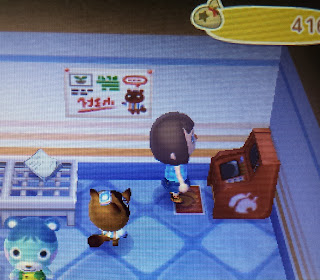 THE CATALOG. IS. HERE. It's an organized little red station in the corner of the T&T Mart (which stocks TWO fortune cookies -- I'll never be able to keep up with Play Coins!) Kicks actually moved in the day after this (took him 3 days) and I bought some lovely new orange sandals and black leggings! :D

I woke up this morning and came outside, and who should be standing there, but the very comedian I'd been waiting for!


I was able to get Dr. Shrunk's signatures and allow him to start Club LOL before lunchtime! THIS MEANS K.K. 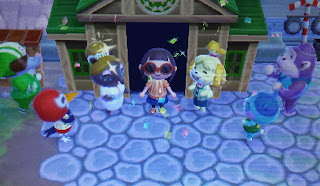 Aaaand I had the ceremony for the Dream Suite that I couldn't have yesterday due to the Solstice. It's almost like I'm being welcomed as mayor all over again! 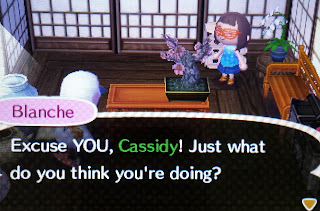 Sometimes snooping pays off!!! When I looked in her dresser, it said that I found a dusty old large bookcase. (How one of those would fit in that tiny little bureau, I wouldn't know...) But then, Blanche got mad at me for snooping (apparently) and then randomly gave me the large bookcase that I found. I was like, OMG, because Molly (I think) has this thing in her house and it is absolutely PERFECT for my planned Rococo room! So into the room it went; now I have a sofa and a bookcase. c: Making progress.
~ 12:06 AM