'Kay, so, this post is going to cover yesterday and the day before that's events, because somehow I've managed not to blog for the past two days! o.O 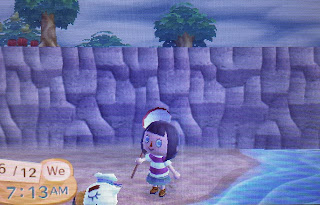 I found Gulliver washed up here this morning after Lucha so kindly mentioned that he'd seen a birdy dude lying on the beach. xD I love how Nintendo programmed Gulliver in this game -- he gives you a description of a location and then asks you what you think it is. He gives you the option to pick between 4 countries... and if you guess right, he'll give you a national item! =D The answer to mine was China, so I got a lovely red-tasseled lantern that I hung above the throne Bluebear gave me. <3 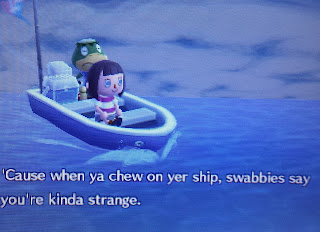 I FINALLY GOT TO GO TO THE ISLAND TODAY! The minute-long boat ride there is always a bit awkward, though, I've found. Kapp'n is SO WEIRD. I mean, chewing a ship?! That's just nonsense! Why even bring it up? 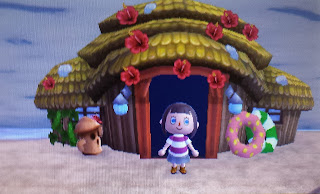 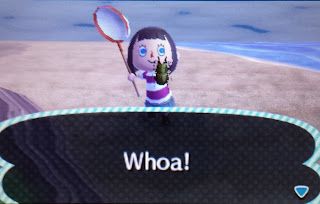 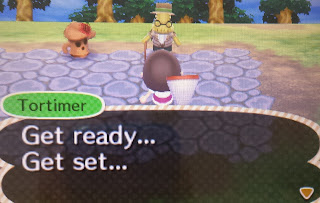 I had a great time on the island, though. It's awesome there -- so much you can do! I caught so many rare beetles (which are EVERYWHERE) including the golden stag beetle. It's apparently rare enough to get a "Whoa!" from my character, so I guess that's an accomplishment. :) I also went on some island tours -- those things are legit cool. You can even get flowers and fruit from the tour islands to take home! 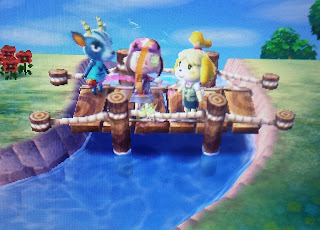 The next morning, the suspension bridge that I paid off two days ago is built! Isabelle wants to celebrate its being, so she makes me shoot off a streamer while she and Bruce watch and clap. Unfortunately, I took the picture at an awkward time, so it looks like I'm whacking myself in the face with the streamer... Whoops. (It's also a little embarrassing that Bruce was the only one there besides Isabelle and me, because he's the only other one who helped pay the thing off. :s) 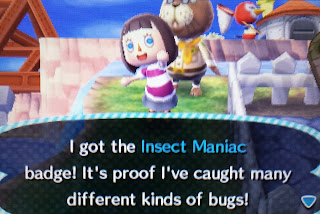 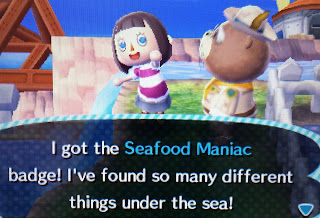 Oh, and Phineas was here yesterday, as well, except I only got two badges. :( 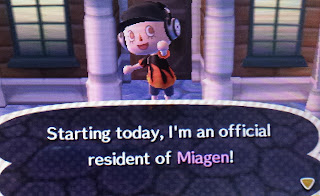 But the thing that was most exciting about yesterday, I think, is that I decided to move in a guy character as my second player. Micah! See, there was various new clothing that I liked in New Leaf that was too masculine for my mayor character (among other things), so now I have this guy! However, this means now I have TWO houses to pay off...
~ 12:33 PM