Deep in dreamland, for the most part

But first, Monday night. I was delivering some island beetles to the Re-Tail, as per my usual nightly Bell regime, and THANK GOODNESS I had my slingshot on me!


'Cause this thing appeared! Apparently, I was so shocked, I forgot to take a picture of the "I got a... !" part. So I had to take a less awesome picture afterward. D: It's the golden slingshot! No preamble, either -- no silver slingshot first, no nothing. I didn't even think I'd shot down many balloons, even!


Yesterday, I was doing my morning rounds, and since the ore rock always regenerates into a random spot every day, it usually makes itself pretty obvious. But not usually THIS obvious. See, it's kind of an inside joke between me and my sister, because we always accuse the ore rock of trying to hide from us, so it's funny when it appears right in plain view. xD 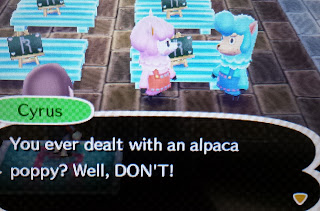 Oh, and Micah met Cyrus for the first time. :s He spent 80% of the encounter threatening Micah, poor guy. Well, at least now he can refurnish his stuff.

But now, onto the main focus of my post: I've started making use of the Dream Suite to visit randoms, and let me tell you, it really makes Miagen feel like a stick in the mud to me, seeing all these wonderfully developed towns. >_< 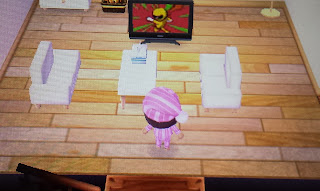 Like, for instance, this Japanese person from the first town I visited had all four rooms (though each only on their first expansion), an upstairs, and a basement. And while the entire house is coated in minimalist wallpaper, flooring, and various objects in the series (plus some other random things, like the TV), the whole house just has a comfortable, homey feel to it. Even though it may seem empty, it doesn't feel empty at all, and I'd leave it just as it is. I guess this really must be the minimalist approach. 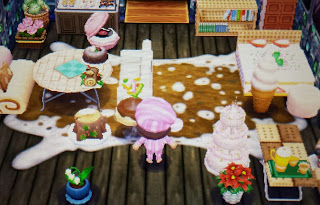 In contrast, we have another beautiful house. ^ ^ Except this house is as busy as the other one was simple. Extravagance, everywhere! I'm not saying I like this any less -- in fact, if someone can make a cowhide rug look good, then they must be doing something right. I'm just surprised at how many different styles of interior design there are out there! :O (But the thing about extravagant interior designs are that there's so much more furniture to be jealous of!) 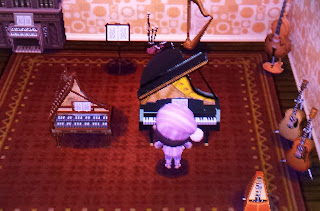 The extravagant sweets house had a lovely basement, as well! I had to jam out on every instrument before I left there, because this was the cutest little music room. <3 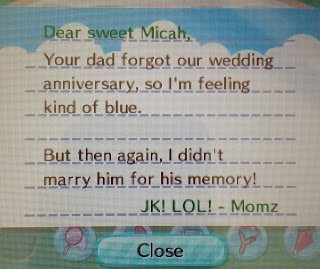 On a completely unrelated note, a couple of hours ago, I took this picture. Why does everything always make moms seem so uncool? Because I love my mom and she's pretty cool, actually. :) (And unfortunately, this means the "mom" in the game sounds nothing like my mom... Why again does Nintendo insist on making your character have virtual parents?)
~ 12:54 PM