Town life as a regular

Well, today marks one week in Miagen! I feel like it's been longer, mostly because I play altogether waaaay too often. :p 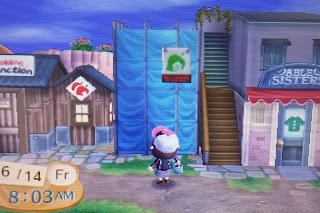 So, a couple of days ago, I encountered this lovely thing when I stepped onto Main Street in the morning. Actually, the first thing I heard was the noise. It sounds like construction whenever someone's building/remodeling on Main Street! I totally had to revel in it every time throughout the day that I walked down Main Street. ;) 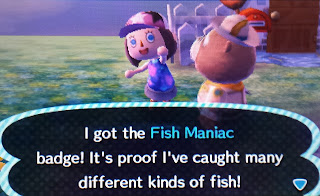 That same morning, I also got another badge from Phineas. ^ ^ Apparently there are 24 different kinds and bronze, silver, and gold of each one. That's a LOT of badges. 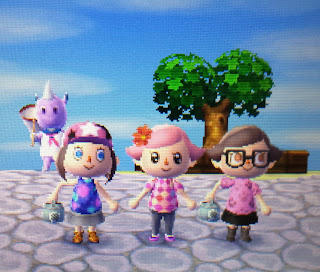 Of course, the highlight of that day was when Estel of Citàlune (Amy from A Forest Life) came to visit Ryann in Shantaki! I awkwardly tagged along because, hey, it was a really cool opportunity, okay? We took this picture in Shantaki's plaza, where we were photo-bombed by Renee. xD 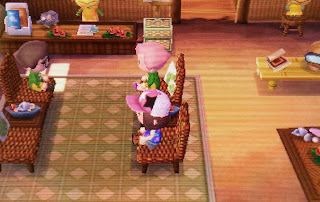 Then we went to the island and caught a bunch of bugs and fish outside. However, we spent most of our time on tours; they were the most fun!


This particular tour was a shark-catching one. I think it helped us all to hone our shark-catching skills (because I, for one, was not very good at it) and it was a lot of fun. All there were in the waters were sharks! We all tied, as well, which meant we all caught the same amount of sharks. I love the game faces our characters put on when we receive our medals. :D 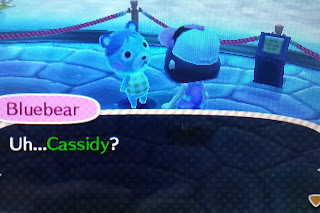 I went home from Shantaki to find Bluebear hanging out with the fishies in the museum. C: She's so cool, I love Bluebear. <3 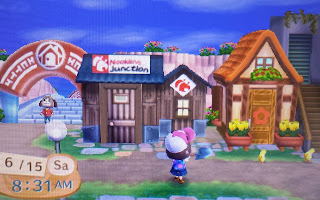 Then, the next day, this majestic thing was in the place of the construction. Lief and his flowers are now open for business in Miagen! The first thing I did was buy an axe. ;) 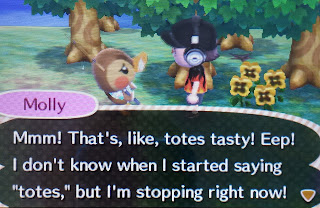 Ahaha, Micah was talking to Molly this morning and she wanted a fruit, so he gave her a cherry and this is what she said. :) I don't know, Molly's just funny. And cute. VERY cute. 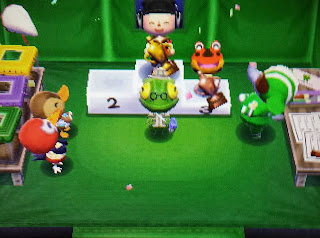 Micah won the Bug-Off yesterday, as well. (y) Unfortunately, my mayor couldn't be there because I preferred having the first-place winner on the podium, and my townsfolk got mad at me! D: Violet in particular raged on me for missing the ceremony (my mayor, I mean) but it isn't like there was anything I could do about that! I could only physically bring one player! All's good now, though, my mayor got her silver trophy in the mail and my villagers got over it. 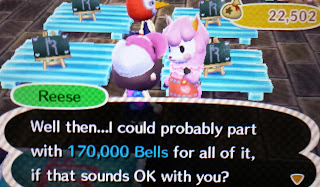 This last thing happened this morning after staying up until 12:00 am catching beetles on the island. x) I ended up making 330 00 Bells from that outing in total (this 170 000 was only one batch) and that was enough to wake Cyrus up for my mayor character! :D Needless to say, I was able to pay off my loan to get an upstairs room with Bells to spare!
~ 10:48 PM