I forgot to take a picture of this screenshot I took on my 3DS on Saturday, since I couldn't get to my phone fast enough (and I don't usually take screenshots, so I kinda forgot about it.) 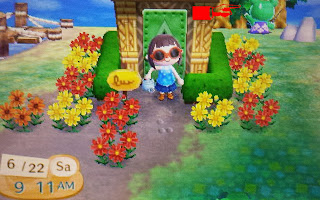 LOL! I was going to take a picture anyway, to show what I've done with each neighbour's house in order to get hybrids, when Charlise fell into a pitfall in the background! I don't think I've ever seen anyone fall into a pitfall before, actually! xD 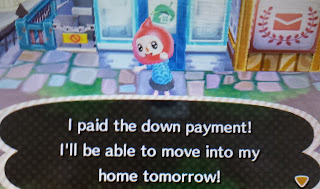 Yesterday wasn't too eventful, though I did add another character -- Saffron! I needed a second female character because a) there are too many girl clothes that I like in this game to be worn by only my mayor character, b) I want to experiment with long hairstyles on someone (because my hair is short and there's only one style that looks like it...) and c) I need a character's house that can dedicate every room (minus the basement) to being a restaurant. :) 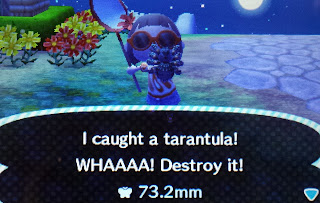 Oh, and then this happened. It was honestly the scariest moment ever. I almost didn't catch it because it nearly succeeded in attacking me. Plus, IT HISSED. I hope I never have to go through such a traumatizing ordeal ever again. 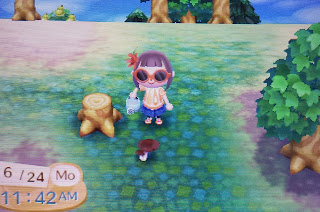 This morning, I was town roaming, and when I passed my lovely heart-patterned stump, there was a MUSHROOM beside it! A flat mushroom. I thought those things only appeared in the fall, but apparently these patterned stumps are magical. I'm just going to hang on to this mushroom for now, because I don't really know what to do with it.

Later today, I went to Bluebear's house, because it was her birthday! ^ ^

I love the way they've done birthdays in New Leaf, because the whole house is decorated with a cake, a sign, a balloon, and even K.K. Birthday playing festively in the background! :D 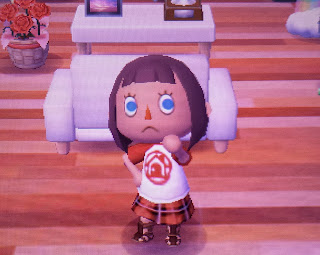 By the way, I only just noticed today how much I've tanned. o.O I think it's time to bust out the umbrella when I'm in the sun for too long in hopes of losing a bit of this tan. I only don't want to get too dark because my mayor character is supposed to look like me, and I'm really pale and don't tan easily. :s I'd prefer for Micah to get darker -- something like Latino would be a good race for him, I think. c:
~ 7:15 PM