I've decided that since I have a bit of time on my hands in the mornings while in France (and it's, like, anywhere between 12:00 and 4:00am in Miagen) I will dream and create posts specifically for my dreams. :) News on Miagen will commence again soon, since I'm almost to the point where I want to start showing progress on Miagen's new direction. ;) 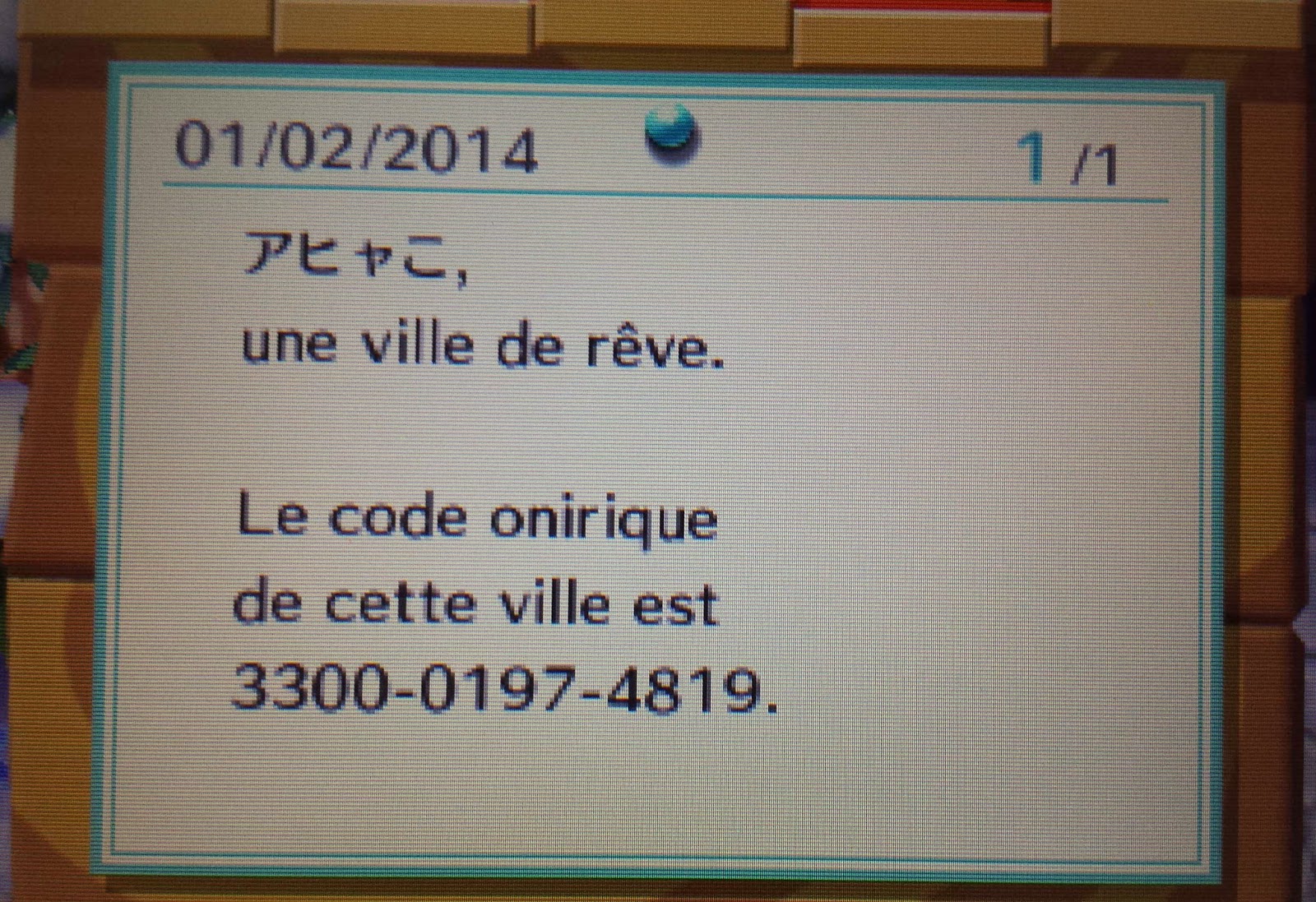 So, we start with the lovely town of アヒャこ, of which I obtained the Dream Address from my friend Jasper a while ago. Update activity happened fairly recently (Feb. 2nd, 2014) although it didn't appear to have changed a lot since I visited before. I didn't take any pictures then, but now that I have, let's get started~ 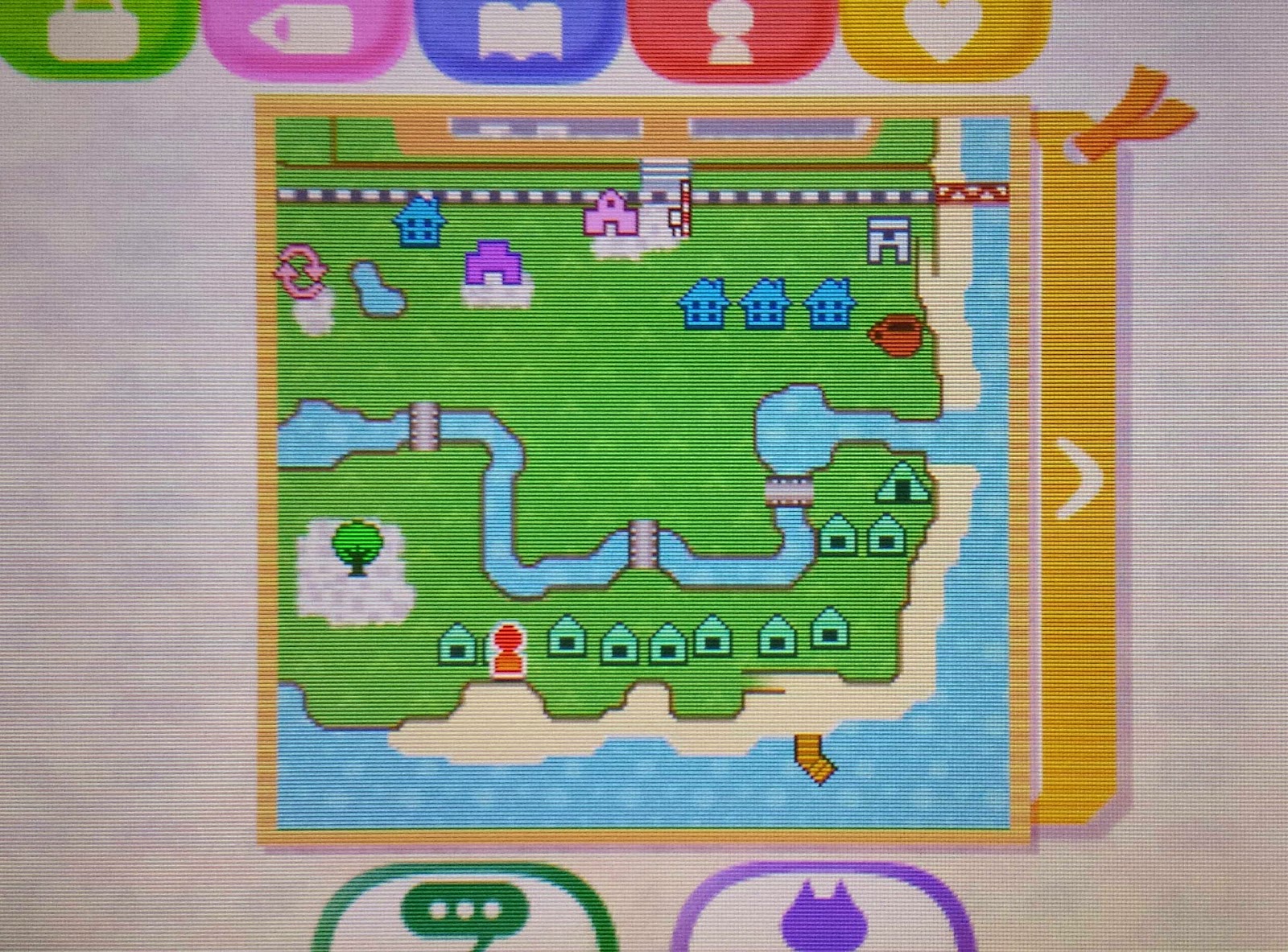 The town itself was not overly spectacular, I found. It was decent, don't get me wrong, but there wasn't that WOW! factor that I've gotten from other towns. Like, the dreamies didn't have a theme or anything, and it's best when the dreamies have a theme, imo. I REALLY like themes. I do, however, commend the effort it must have taken to get all the houses squished onto one side of the town like that. Not an easy thing to do. 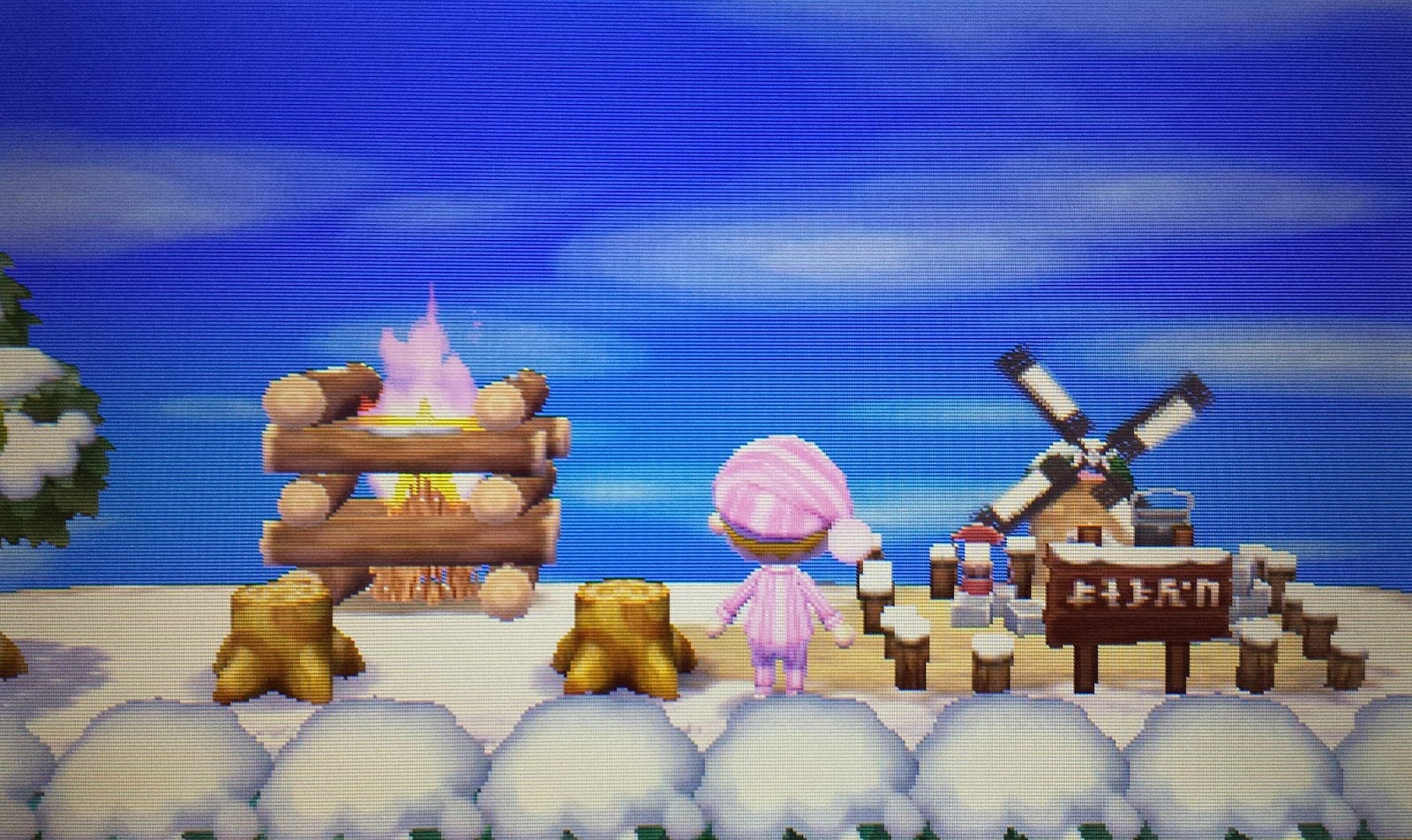 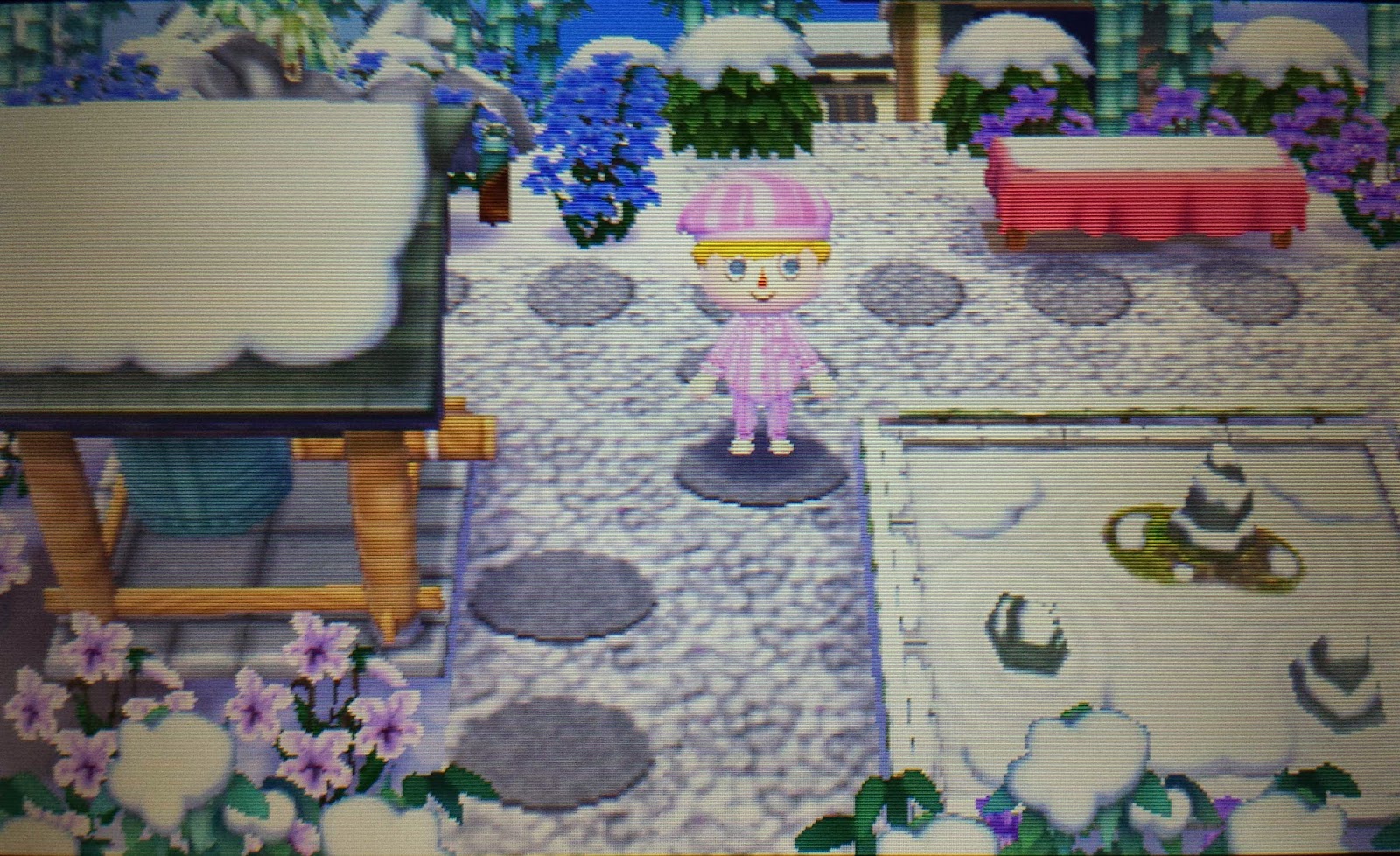 These two shots to the left are two of the spots in town that I chose to highlight, though, because they were, admittedly, well-put-together locations. The campsite (top) is nestled up in a nook of the river, between a cliff and the pond. It's contained by a row of bushes, with its own personal bridge, a campfire, a couple of stump chairs, and a windmill in the background. How cute--I'd camp there! The Japanesy-type area (below) is also super-kawaii, especially the addition of stepping stones! If you look in the back, there's the Japanese train station and (not shown in the picture) to the right, there's the Japanese town hall. (And the Japanese mayor's house just right of that.) The thing that really gets my goat about this town, though, is that right below this tranquil setting is a paved park, with a bunch of very un-tranquil things, such as the video screen PWP and the jungle gym-type thing. So, yeah, even just that kinda ruins the whole atmosphere. D: Now, the HOUSES, though... 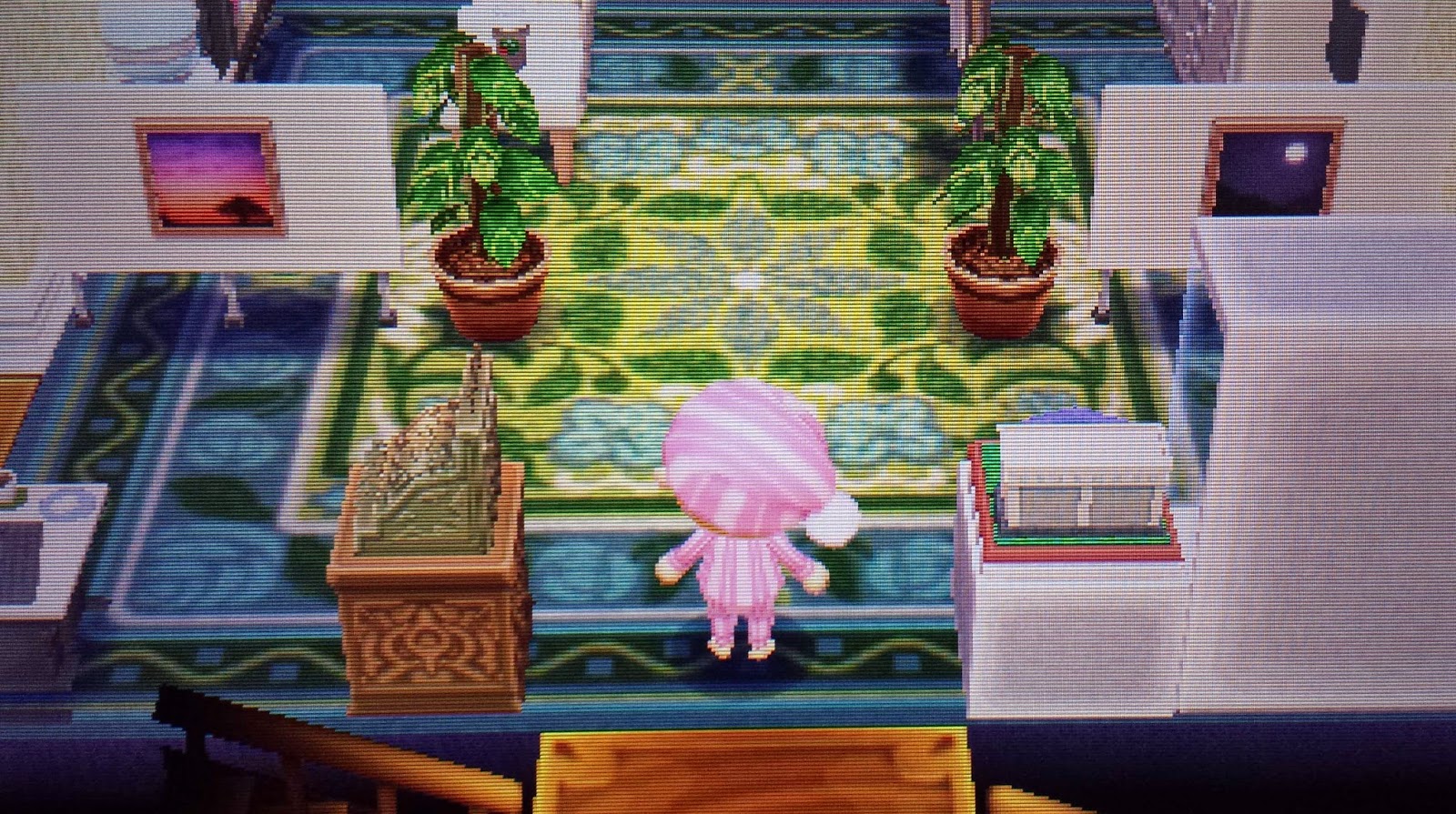 This is the first house that I went into, the first in a line of identically-exteriored houses in the north of town. Upon first inspection, it appears to be a hotel with a rather magnificently done foyer.

Upon closer inspection, the various rooms seem to be hotel rooms that showcase various Gracie sets! The back room boasts the sweets series (top), the left room has the Gracie series (left), the right room houses the gorgeous series (right) and the upstairs room contains the princess series (bottom). 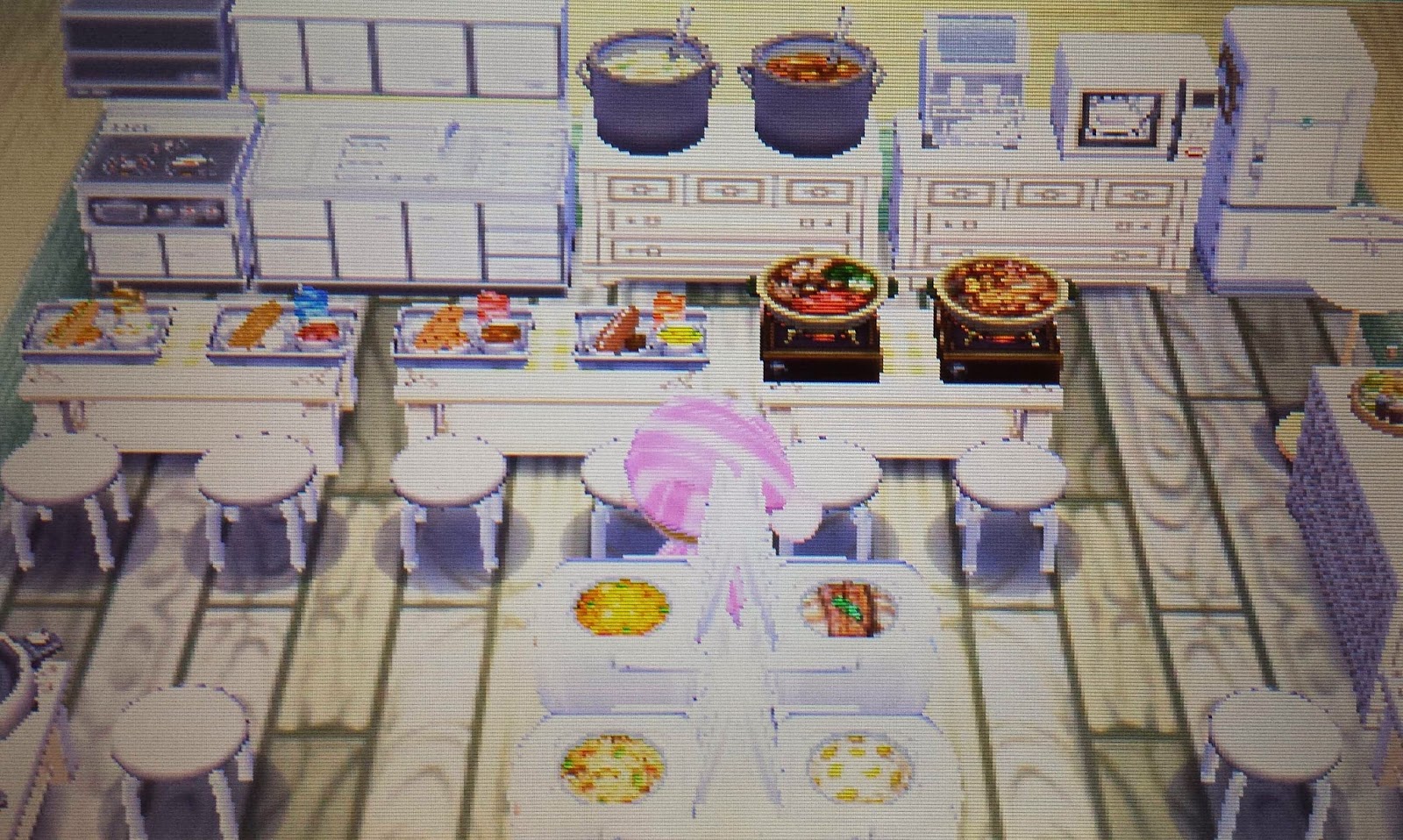 ...And down below, there's a full-out kitchen and dining area! So much white... o.O Regardless, not much more to say about this, except that it's a very nice kitchen. Very food. Much eats. Wow. 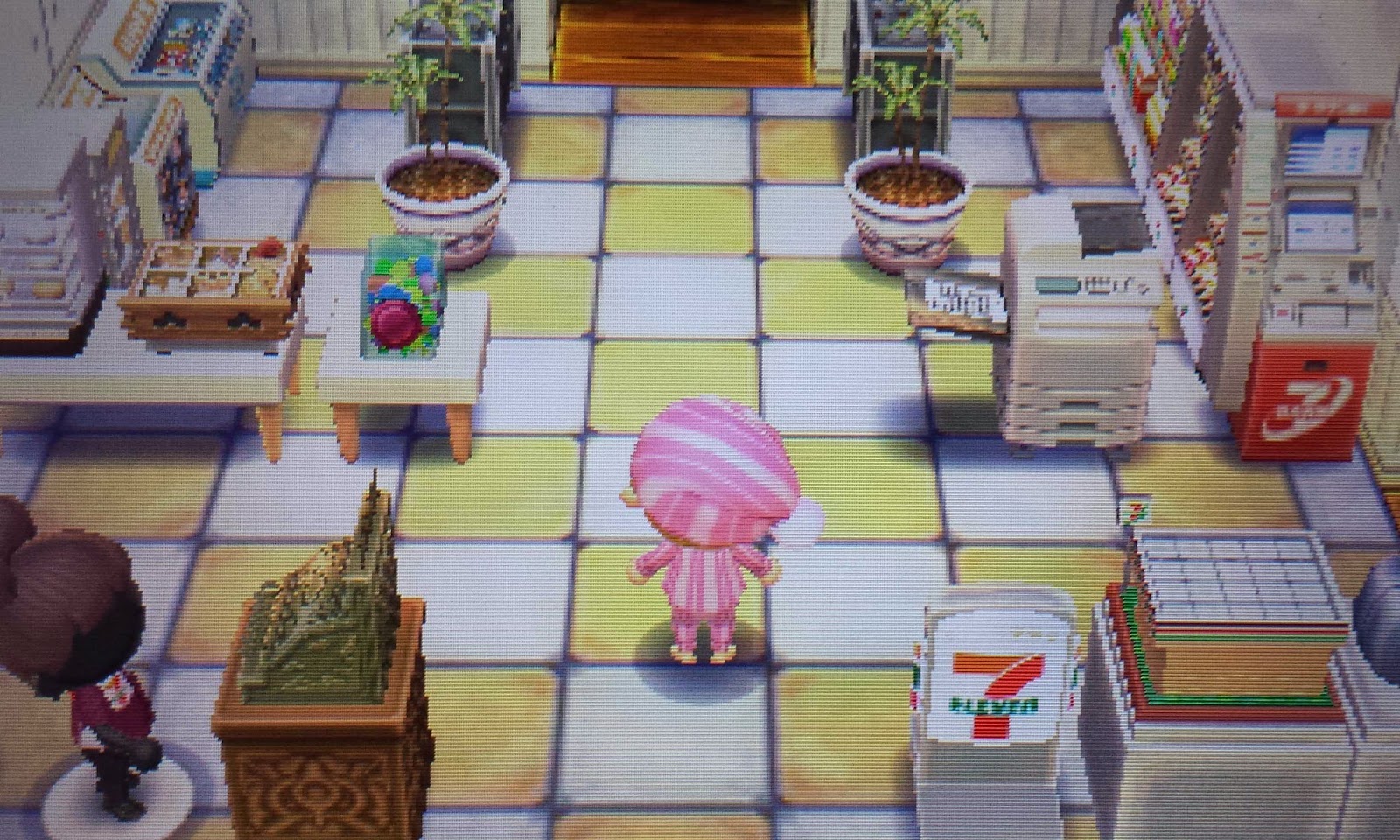 The second house in line has a convenience store interior with a similar layout to its congruent neighbours. It makes one think that the layout of the rest of the rooms will be similar, too. (And go figure, they are. c: )

This time, we have "pseudo-Gracie" series on display in the hotel rooms! In the back room, we have the regal series customized to have blue accents (top), in the left room is uncustomized rococo furniture (left), in the right room is alpine furniture customized to have a leaf design (right) and the upstairs room holds VERY chic silver-customized modern furniture. (Super cool, will be using some of that myself later~) 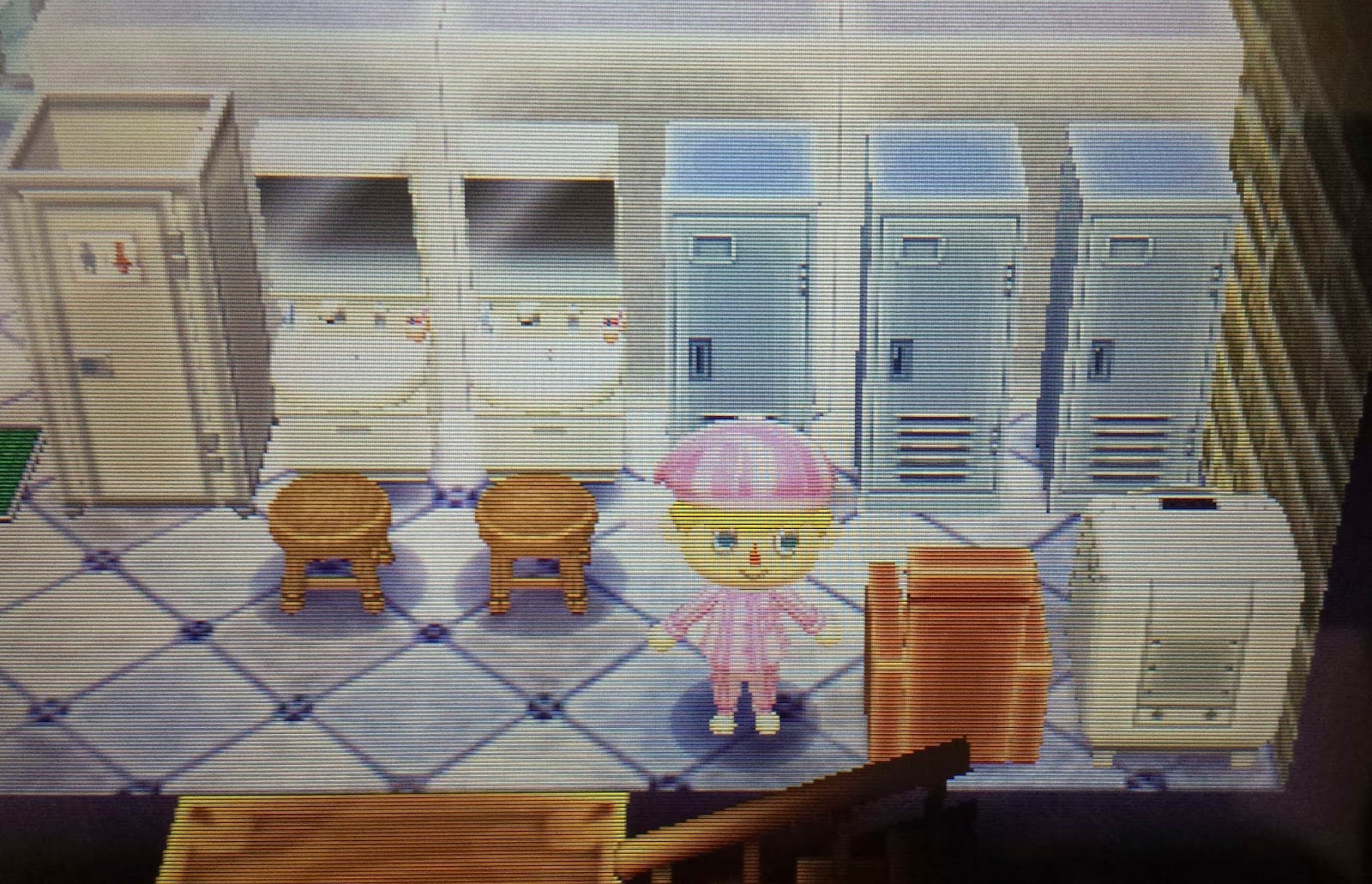 Ah, the downstairs. :] I was impressed with the basement of this house when visiting when I first got the Dream Address, and it still impresses me now. 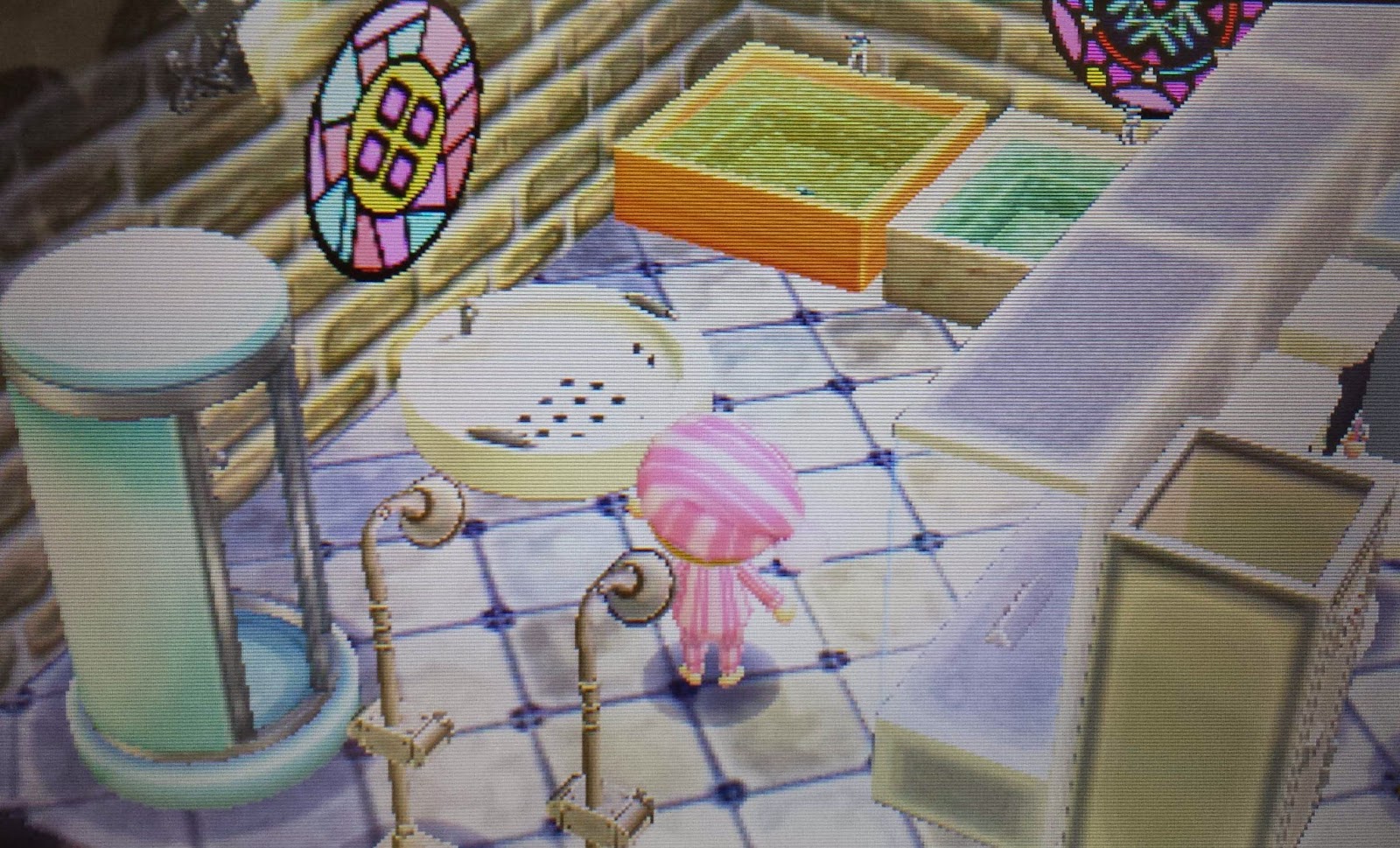 It's a bathhouse! How creative! And so cute: the person did a wonderful job. :) 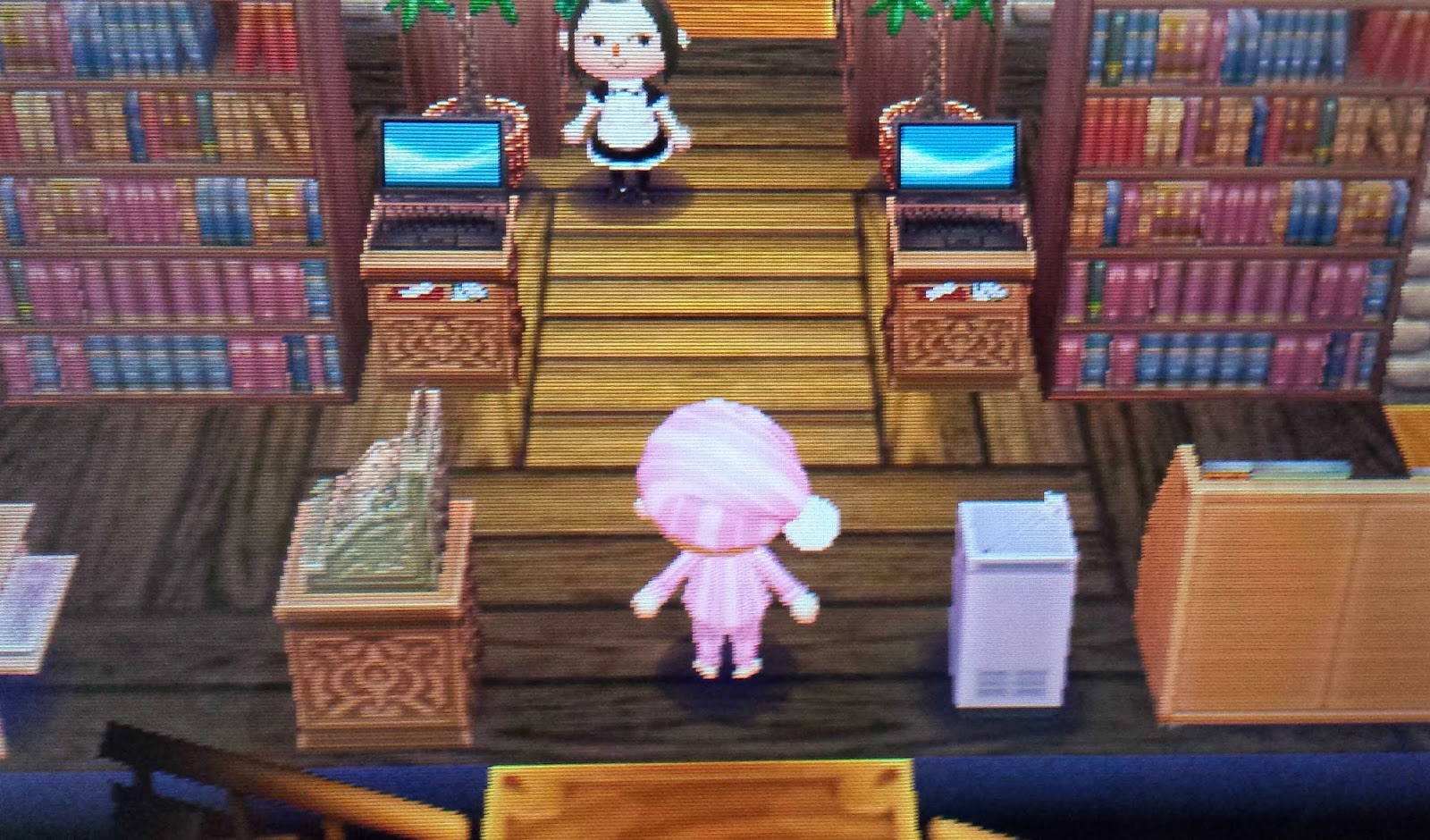 The last foyer of the house-triplets is a library! And a beautiful one at that! :D This is honestly adorable: there are little reading nooks with tables and chairs between the bookcases that you can't really see in the picture. (Sorry!)

And as it should just so happen, the room layout follows the same pattern as the other two! Out back is the trump series, which is technically a Gracie series, but it didn't fit in the other house I suppose xD (top), to the left is the Pave series (left), to the right is the egg series (right) and upstairs is the sloppy series (bottom). And a huge page taken out of Aika Village's book with that last one: Hypno K.K. is playing in the sloppy room!! 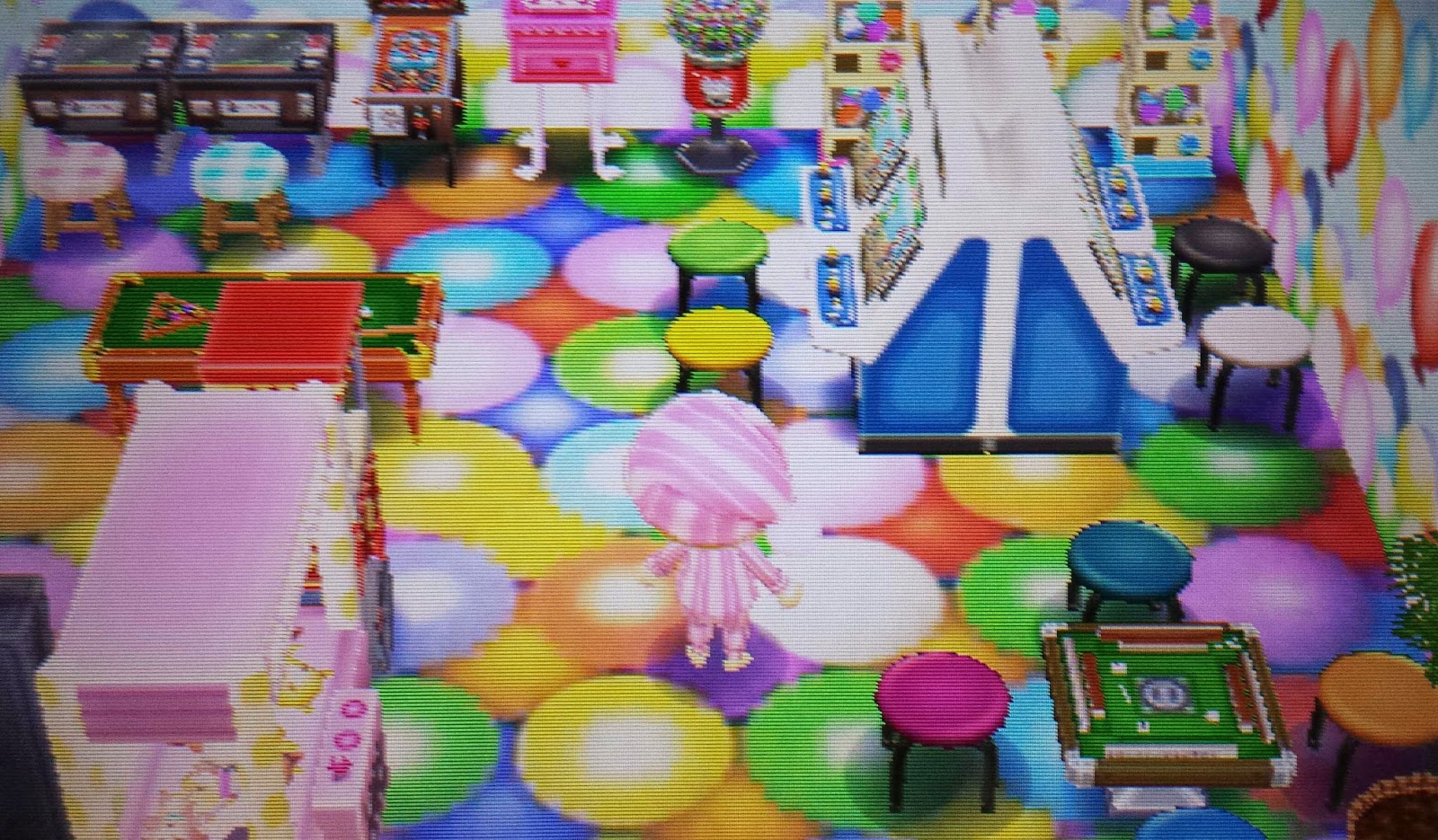 The library's basement is a balloon casino of sorts. ;) Well-put together: I mean, a casino is by no means an original idea, but this appears to be a good one, at least. I like how the stools resemble billiard balls, whether that was the intention or not.

Lastly, I just have a couple of shots of the mayor's house. :) The foyer was Japanese themed (and to be brutally honest, looked almost exactly like every other Japanese home I've ever seen--and that's a lot) so I decided again taking a picture. The room to the left, though, is what appears to be a fast food restaurant, and I quite like how this one was set up. (Might have to mooch a bit of inspiration off this one, eh?) Also, the basement was an unexpected little tropical scene. Not much more to say. Trop mignon, n'est-ce pas?
~ 4:39 PM